30th August 1930 – the first British Empire Games (now known as the Commonwealth Games) had just been held in Canada, while the nine days before this date saw the births of Princess Margaret and actors Sean Connery and Windsor Davies. The summer had also seen the death of Sherlock Holmes creator Sir Arthur Conan Doyle.

Meanwhile, at Upton Park, Syd King’s West Ham United opened the 1930/31 season with a 2-1 First Division victory over Huddersfield Town. Vic Watson (pictured below) bagged a brace in front of 18,023 – the Hammers’ greatest ever goalscorer would go on to score 14 goals in 18 matches during this campaign. The match also saw a debut for inside-left Wilf James who had joined the Irons from Notts County during the close season – he would score seven goals in 41 appearances for the club and won both his Welsh international caps during his stay in east London. He moved to Charlton in February 1932.

The Hammers went on to finish the 1930/31 season in 18th place, while Clem Stephenson’s Huddersfield ended up fifth – Manchester United were relegated in bottom position. Viv Gibbins was the Irons’ top goalscorer with 19 goals from 22 appearances. Arsenal won the First Division title and West Brom won the FA Cup.

A small number of players have worn the shirts of both West Ham United and Huddersfield Town. Those who have represented both clubs include:

Lou Macari managed both clubs, while Chris Powell played for West Ham and managed Huddersfield. Sam Allardyce played for the Terriers and managed the Hammers.

Today’s focus though is on a full-back who played for West Ham in the 1990s and had a loan spell with Huddersfield. Kenny Brown was born on 11th July 1967 in Barking – his father Ken made 474 appearances for the Hammers between 1953 and 1967, winning the FA Cup in 1964 and the European Cup Winners’ Cup in 1965. Kenny began his career with Norwich under his father’s management in 1986 before moving to Plymouth in 1988. He made over 100 appearances for the Pilgrims before moving to First Division West Ham United in August 1991, initially on loan. The Browns would be the third father-and-son pairing to play for West Ham after Jim Barrett Senior and Junior, and Bill Lansdowne and Billy Lansdowne. They have since been joined by Frank Lampard Senior and Junior, Steve and Dan Potts, John and George Moncur, and Rob and Elliot Lee.

The 24-year-old Kenny made his debut in a 0-0 opening day draw with Luton at Upton Park on 17th August 1991 and scored his first goal for the club in his fourth appearance in a 3-1 win over Aston Villa at Upton Park 11 days later. His move was made permanent for what would become an eventual fee of £235,000. His second goal for Billy Bonds’ men was the first West Ham goal I ever saw, in a 2-1 home defeat to Manchester City on 21st September 1991. Kenny had to wait seven months for his next goal but it was one that went down in Hammers folklore – the winner in a 1-0 triumph over Manchester United which helped deny the Red Devils the title and handed it on a plate to Leeds. The Irons’ relegation would be confirmed just three days later. Kenny made 33 appearances in all competitions in 1991/92.

Predominantly a right-back but happy to fill in at left-back or in midfield, Kenny made 19 appearances the following season and scored two crucial goals in the promotion run-in. His late long-range strike at Birmingham on 3rd April 1993 sparked a dramatic comeback from 1-0 down to an eventual 2-1 win and he bagged the third in a 3-1 win at Swindon on 2nd May on the penultimate weekend of the season – the Hammers were promoted by virtue of scoring one more goal than nearest rivals Portsmouth.

Kenny found game time hard to come by in the following two seasons, making 12 appearances in each of the 1993/94 and 1994/95 campaigns. Harry Redknapp had taken over from Bonds by the time Kenny scored his last goal in claret and blue, in a 2-0 FA Cup third round win at Wycombe on 7th January 1995 (he is pictured above, celebrating with Alvin Martin). A flurry of loan spells followed – Kenny made five appearances for tomorrow’s opponents Huddersfield in 1995 and also spent time at Reading, Southend, Crystal Palace, Reading again and Birmingham before signing permanently for the Blues in a £75,000 move in January 1997. Kenny’s final appearance for West Ham had been in a 1-0 home win over Nottingham Forest on 3rd February 1996. He had made 79 appearances for the Hammers in all competitions, scoring six goals. My video below is a compilation of Kenny’s six strikes in claret and blue.

The 29-year-old Kenny quickly realised he had made a mistake in moving to St Andrew’s, the club then being owned by David Sullivan and David Gold – he teamed up again with Bonds at Millwall just four months later. His last action in the Football League came at Gillingham, where he spent the final months of the 1998/99 season. Kenny signed for non-league Kingstonian before moving to Ireland with Portadown, then on to Wales with Barry Town. Kenny became player-coach and later manager at Barry, winning the Welsh League and Cup double in consecutive seasons. He resigned after a turbulent change of ownership which saw the club unable to pay its players. Kenny returned to England, signing for Tilbury, and ended his playing days in Spain with Torrevieja, an hour south of Benidorm.

In May 2006, Kenny was appointed Director of Football at Javea, near Alicante, and ran a summer school there with Julian Dicks. Kenny was appointed Dicks’ assistant at Grays in September 2009 and was named assistant manager at Concord Rangers in June 2012. Just a month later though, he was appointed Lead Development Coach at Barnet. After a season with the Bees, Kenny moved to Chelmsford to be assistant manager to Dean Holdsworth but departed before Christmas 2013 when Holdsworth left the club. Kenny joined Dagenham and Redbridge as Academy Manager in the summer of 2014, working with the Under-12s to Under-16s. Kenny completed his UEFA Pro Licence in the same group as Thierry Henry and Mikel Arteta. Now aged 51, he is currently Head of Coaching at Millwall.

The referee on Saturday will be Jonathan Moss. The Yorkshire-based official has sent off a player in six of his last 13 appointments involving the Hammers – the 4-3 defeat to Bournemouth in August 2015 saw Carl Jenkinson sent off, while the 2-1 win over Chelsea in October 2015 saw Nemanja Matic dismissed (then-Blues manager Jose Mourinho was also sent to the stands). Moss issued a red card to Jordan Ayew of Aston Villa in February 2016 with the Hammers going on to win 2-0 while, going further back, Burnley’s Michael Duff was also sent off by Moss in our 1-0 home win over the Clarets in May 2015.

Moss also issued a red card to Cheikhou Kouyate in the 5-1 FA Cup fifth round win at Blackburn in February 2016, although this was later rescinded. Arguably the 48-year-old’s most controversial Hammers appointment was the 2-2 draw at Leicester in April 2016 when he sent off Jamie Vardy and awarded two penalties, the second arriving deep into stoppage time as the Foxes rescued a precious point. Moss’ matches in charge of the Hammers last season were December 2017’s goalless draw with Arsenal at London Stadium, our 4-1 win at Huddersfield last January, our 3-0 home win over Southampton last March and our 0-0 home draw with Manchester United in May. His most recent Hammers appointment was our 1-0 home win over Arsenal in January.

Enjoy the game – Come On You Irons! 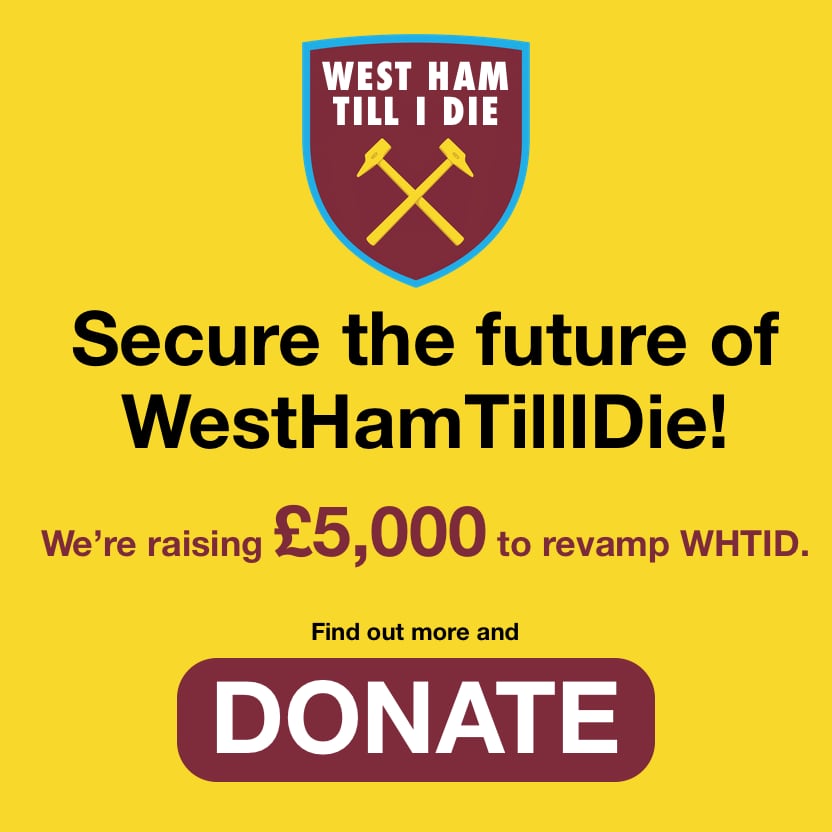